The newest research finding for MT-2 indicates that the peptide can reverse certain autistic features in a commonly used mouse model of autism spectrum disorder (ASD). There is no treatment for the condition, but recent search has indicated that oxytocin therapy may be useful in mitigating some of the behavioral problems associated with ASD. Using a mouse model of maternal immune activation known to lead to autism, researchers investigated whether MT2, which is known to stimulate oxytocin release, could counteract ASD or reduce common ASD behviors. Their research revealed that administration of MT-2 reverses the decreased communication, impaired social interaction, and repetitive behaviors associated with autism in this particular model. In fact, the researchers found that MT-2 administration increased the expression of oxytocin receptors in specific parts of the brain, suggesting a direct correlation between oxytocin signaling in those areas and ASD-specific behaviors[1]. 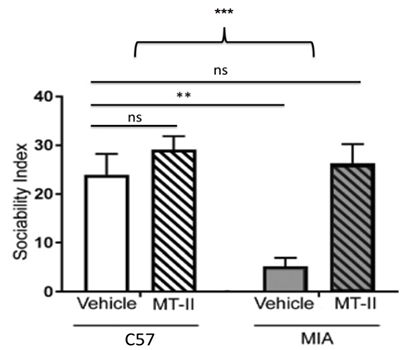 Impact of MT-2 on sociability in rats with ASD (MIA) showing that MT-2 returns sociability ratings to near the baseline of control animals (C57).
Source: PubMed

These findings not only suggest potential avenues for developing a treatment for ASD, they have helped to define a specific brain pathway that may be integral to the development of ASD in the first place. These findings could help scientists develop a complete model of ASD and thus both treatments and preventative measures.

There is good evidence to suggest that MT-2 can reduce fat storage and hunger behavior in animal models. Researchers have found that the melanocortin-4 receptor (MC-4R) plays a role in food preferences and intake and that MT-2 is a potent agonist of MC-4R. Administration of MT-2 to mice causes significant reductions in how much food they consume, but also changes their preference for fatty foods. Mice given MT-2 ignore fatty foods, which they would otherwise prefer. Similarly, mice devoid of the MC-4R receptor consume fatty foods almost exclusively and are immune to the effects of MT-2[2].

The effects of MT-2 are similar to those of the hormone leptin, sometimes called the satiety hormone because it reduces cravings and food intake. Leptin, however, has never been useful in the treatment of obesity, even in individuals who are leptin deficient. This is likely because there are two pathways for satiety, called leptin-dependent and leptin-independent pathways. Research suggests MT-2 is more effective in stimulating both pathways and thus may be a more effective exogenous treatment for reducing hunger[3], [4]. This latter finding has been bolstered by the discovery that thyrotropin-releasing hormone (TRH) gene expression, which has long been known to play a role in the leptin-satiety pathway, is also affected by MC-4R stimulation[5]. Both MT-2 and leptin are thought to cause an increase in TRH expression in the paraventricular nucleus of the hypothalamus, a region of the brain associated with satiety and food intake, but only MT-2 crosses into the central nervous system in concentrations high enough to have an effect on TRH expression.

The pathogenesis of diabetes is defined by high blood sugar levels, hypersecretion of glucagon, and the production of ketone bodies[6]. It has been known for some time that leptin counteracts these factors by increasing the uptake of glucose, suppressing glucagon production, and interfering with the pathway that leads to ketone body formation. These actions do not depend on insulin and thus leptin signaling is being actively investigated as an alternative means by which diabetes might be treated.

Research has revealed that leptin’s effects on blood sugar are regulated through melanocortin receptors and that MT-2 produces similar effects[7]. This is significant because leptin has its primary effects in the brain but does not cross the blood-brain barrier as readily as MT-2. Thus, exogenously administered leptin does not reach the CNS in substantial quantities, a fact that reduces its effectiveness as a drug and hands an advantage to MT-2 even though the effects of the two peptides on melanocortin receptors are nearly identical.

In keeping with the idea that MT-2 may affect oxytocin signaling and thus behavior in ASD, research also reveals that the MC-4R receptor may play a role in impulse control. Past studies in rats have shown that administration of MT-2 reduces alcohol intake and increases water intake even in rats that prefer alcohol[8]. More recently, research has revealed that melanotan-2 works synergistically (boosting efficacy more than seven-fold) with naltrexone to blunt binge-like ethanol intake in mice[9]. 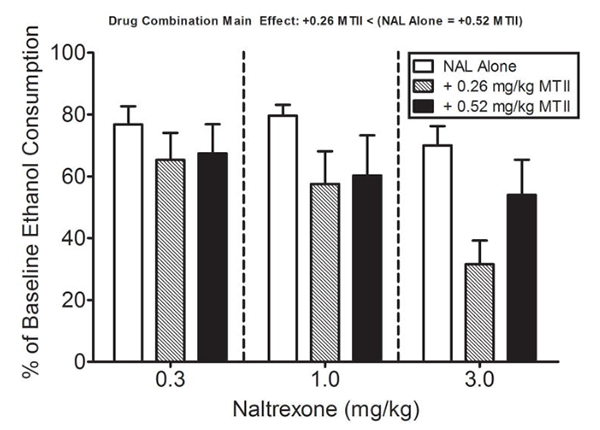 Percent of baseline alcohol consumption in mice treated with naltrexone or naltrexone and MT-2.

These findings suggest that MT-2 might not only be an effective treatment in alcohol-related disorders, but that the peptide is tapping into a more fundamental process of craving and desire in the mammalian brain. This research may open up pathways to a deeper understanding not just of alcohol abuse and hunger, but the role of oxytocin in impulsive behavior. It may even help researchers identify craving pathways and advance our understanding of human motivation in aspects of life ranging from work to relationships.

Erectile dysfunction (ED) is often attributed to vascular issues and can be effectively treated in a majority of men via sildenafil (Viagra) and other drugs that improve blood flow by reducing vascular resistance. Not all ED is due to vascular issues, however, and so sildenafil and similar drugs are ineffective in a small percentage of men and in the vast majority of women who suffer from hypoactive sexual desire disorder. It has long been known that MT-2 is an effective treatment for ED, but research suggests that it may have more wide-ranging application than drugs like sildenafil due to its actions in the central nervous system. In a study of men who had failed treatment with Viagra, eighty percent responded to MT-2 treatment[10]. MT-2 has been actively investigated in the past as a treatment for both male and female sexual desire disorders.

MT-2 is a heavily researched peptide, particularly regarding human behavior, sexual desire, and impulse control. The peptide, in various forms, has been investigated in clinical trials, though problems with routes of administration have forced scientists back to the drawing board. There is active and ongoing research into the benefits of this particular peptide.