PT-141 is a unique peptide in that it stimulates the MC-4R, which is known to produce sexual arousal in the central nervous system and influence sexual behavior[1], [2]. Studies in mice have shown that agonist binding to MC-4R causes sexual arousal and increased copulation in both males and females[3], [4]. Because PT-141 works via a different mechanism than drugs like Viagra, it is possible to treat sexual arousal disorders in both men and women that stem from causes other than reduced blood flow to the genitals.

A study of men with erectile dysfunction (ED) who did not respond to sildenafil (Viagra) found that roughly one third experienced adequate erection for sexual intercourse with PT-141 (administered via nasal spray). There was also a strong dose-dependent response in the trial, indicating that PT-141 is indeed effective in certain cases[5]. This suggests that PT-141 could offer insight into correcting ED in settings where sildenafil has failed and may offer insight into central causes of hypoactive sexual desire. 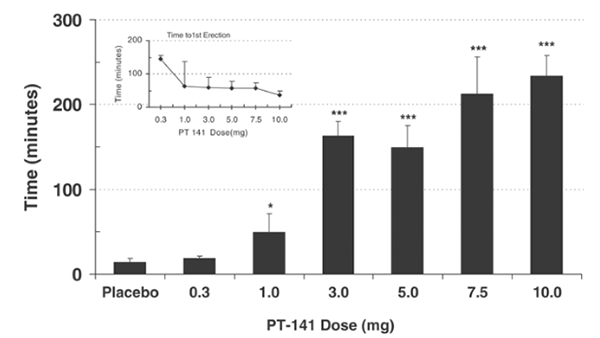 Duration of penile base rigidity greater than 60% for placebo compared to various doses of PT-141.

Interestingly, PT-141 was pulled from clinical trials before it reached approval for use in women suffering from HSDD. This is despite signs that the drug increased the number of satisfying sexual events per month and decreased female sexual distress scores in a statistically significant manner without any substantial side effects[6]. Many experts who treat female sexual dysfunction (FSD) were dismayed to find the peptide was not being advanced despite positive results. They point to a lack of established endpoints for trials of FSD and socio-cultural biases against women’s sexual health as the primary roadblocks that are inhibiting approval of what they see as much-needed therapies[7]. They hope that greater attention will be given to the topic and that the FDA will establish more concrete guidelines for evaluating therapies like PT-141 that can offer benefit. These experts also expressed dismay that the pharmacological treatments were not tested in conjunction with other established means of treating sexual dysfunction as they believe that the combination may prove synergistic and that peptides like PT-141 may be useful for overcoming initial barriers and jump-starting psychological treatment modalities.

In 2017, partly in response to the outcry against the cessation of earlier trials, Phase II Reconnect trials were launched using subcutaneous injections of PT-141 for FSD. The newest version of PT-141, called Rekynda, may soon be available for use in the United States. It would be legal to use PT-141 off-label, at that point, to treat both male and female sexual dysfunction[8]. These new trials have relied on the kind of modified endpoints that experts in FSD have touted as beneficial to seeing these kinds of treatments approved.

In 2009, PT-141 was modified slightly and investigated as a potential treatment for hemorrhagic shock. Because PT-141 binds to both MC-1R and MC-4R, it reduces ischemia and protects tissues against inadequate blood supply in the setting of hypovolemic (hemorrhagic) shock. The drug, when administered intravenously, does not produce substantial side effects. It was last in phase IIb trials. The modified version of PT-141 is referred to as PL-6983.

The MC-1R has been found, in a rat model of a specific fungal infection, to possess important anti-fungal and anti-inflammatory properties[9]. This is of particular importance because current anti-fungals are limited in terms of their mechanism of action and all produce serious and treatment-limiting side effects in certain patients. Having an alternative to use in the treatment of fungal infections could reduce morbidity and mortality substantially, especially in patients with immune compromise.

The MC-1R receptor is an important stimulus of DNA repair pathways and thus is of interest in cancer treatment and prevention[10]. Research shows that people with variants of MC-1R are at increased risk for both basal cell and squamous cell carcinoma[11]. Altered PT-141 may be able to correct the problems experienced as a result of these variants and prevent or treat these cancers.

Right now, PT-141 has received widespread and intense attention as a treatment for sexual dysfunction. There is, however, a great deal of potential research outside of sexual dysfunction and hemorrhage that PT-141 could be applied to. For instance, MC-4R is well-known to be defective or missing in certain cases of obesity and may account for as much as 6% of all cases of early-onset obesity. PT-141 offers a unique means of exploring this particular cause of obesity and potentially illustrating a pathway for intervention. MC-1R plays roles in both pain and inflammation as well as kidney pathology and the spread of infection. There is a plethora of available research that PT-141 could help to shed light on.